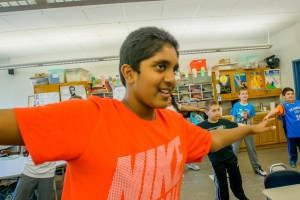 Seven Ways That Yoga Is Good for Schools

At Edmunds Elementary, a diverse inner-city school in Des Moines, Iowa, yoga is on the daily schedule.

Each morning, every classroom begins the day with a “Be Well” discussion about topics such as gratitude, good citizenship, being a peacemaker, and getting enough sleep. Breathing, yoga-based movement, and a mindful meditation follow, helping students bring their attention to the present moment and preparing them for learning time.

After lunch, the lights are dimmed and soft music plays as students return from recess for 10 minutes of quiet mindfulness and reflection activities, such as journaling, coloring, or listening to a guided relaxation story. Teachers even integrate yoga at other times of the day as needed, and they unanimously agree it’s time well worth taking.

One teacher shared, “Practicing yoga and taking these mindful pauses throughout the day is like hitting the reset button, for all of us. I was going to leave teaching I was so overwhelmed. Not anymore.”

Thanks to that reset button, the school is seeing results: Test scores increased more than 18 percent and the number of students being sent to the office decreased by more than two-thirds over two years. The school’s principal notes that everyone is feeling a greater sense of community, connectedness, and engagement in school.

Edmunds Elementary, which uses a program we developed called Yoga 4 Classrooms, is not alone. Schools around the country, from San Francisco to D.C., are implementing yoga in classrooms and beyond, with students, teachers, and parents reporting tremendously positive effects. But does research back up their experiences? And what kind of results can we hope to see from yoga programs in schools?

While the science behind school-based yoga is relatively new, the initial evidence from a growing number of studies is promising. Here are seven ways that integrating yoga in schools can support students and teachers, while helping schools address many of the challenges common in education today.

In order for students to succeed at school and in life, it’s crucial for them to develop self-regulation skills: the ability to monitor and adapt their behavior, attention, and emotions in response to internal cues, the environment, and feedback from others. And research suggests that school-based yoga may benefit students’ self-regulation.

For example, a randomized controlled trial of 37 high school students found that doing 40 minutes of yoga three times per week for 16 weeks significantly improved their ability to regulate their emotions, compared to participating in a standard physical education (PE) class.

In addition, another study of 142 sixth-graders compared students who performed four minutes of mindful yoga at the beginning of their English Language Arts (ELA) classes over an entire school year to students who received regular ELA classes that included a few short discussions about mindfulness (but no mindful yoga). The results showed that this mindful yoga program also led to increases in self-regulation, according to student questionnaires. Most schools use academic performance as the primary criteria for student success. Unfortunately, many students struggle to achieve or maintain adequate grades, which can lead them to disengage or drop out. But research suggests that yoga might improve attention and memory and alleviate academic stress, three factors that are important for academic success. 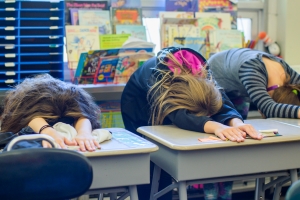 School-based yoga might also improve students’ grades. For example, one study randomly assigned 112 high school students to participate in either yoga or PE twice per week for 45 minutes across the entire academic year. Among students who had high levels of participation, the yoga group ended up with a significantly higher grade point average (GPA) than the PE group.

Another similar randomized controlled trial assigned 95 high school students to participate in either a yoga program or a standard PE class. The study found that students who participated in the yoga program were able to maintain their GPA, whereas students in the PE group showed a decline in GPA during the 12-week program.

The authors write, “Yoga may improve academic performance by enhancing self-regulation which may, in turn, mitigate stress, thus leading to enhanced attention and learning.”

Children and adolescents are exposed to a variety of stressors at school and at home. These stressors can range from extreme, chronic stress such as living through poverty or abuse, to relatively minor stressors such as test anxiety. Adolescents with unmanaged stress are at a higher risk for developing mental health issues such as anxiety disorders, which is why some researchers have explored whether school-based yoga might help reduce anxiety, tension, and stress.

One randomized controlled trial of 97 fourth- and fifth-graders assigned some students to participate in a mindful yoga program that met four days per week for 45 minutes. Compared to attending school as usual, 12 weeks of mindful yoga led to significant reductions in students’ problematic responses to stress, such as experiencing repetitive negative thoughts and strong, intrusive emotions.

A study of the Yoga 4 Classrooms program found that a group of 18 second-graders who participated for a half hour per week for 10 weeks showed a significant decrease in cortisol concentrations from before to after the program. Cortisol in our saliva tends to increase during stress, and heightened cortisol concentrations as a result of repeated stressors may be detrimental to our mental and physical health. This study provides preliminary evidence that school-based yoga might help mitigate these negative effects.

In addition, one study enrolled 49 inner-city high school students to participate in a semester-long yoga and mindfulness program several days per week, and students reported significant reductions in their anxiety. Another study randomly assigned 51 high school students to participate in either a 10-week yoga program or a PE group that met a few times per week. The study found that tension and anxiety worsened in the PE group but improved in the yoga group.

School-based yoga may also help students cope with negative life events, like troubles at home or getting a low grade in an important class. For example, a randomized controlled trial of 155 fourth- and fifth-graders assigned some students to participate in an eight-week mindful yoga program that met for one hour per week. The study found that the yoga program helped students cope more often with difficult life events, compared to regular schooling. 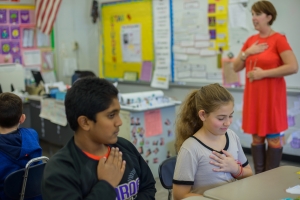 Another study found that 30 elementary and middle school students who participated in a 10-week yoga program once or twice per week improved their resilience—the ability to successfully cope with challenging life events.

The authors concluded, “Yoga practice may increase the [students’] sense of control and self-efficacy with respect to stress and emotion, thereby increasing resilience.”

Bullying occurs quite regularly in schools; in 2011, approximately 28 percent of U.S. adolescents reported being bullied during the past school year. Bullying can lead to a variety of negative effects on students, including difficulties with academic performance. In addition, problem behaviors such as bullying often result in suspensions and disciplinary referrals, which means those students end up missing out on important academic material, too.

But research suggests that yoga might help. For example, third- to fifth-grade students who participated in a 10-week yoga program for one hour per week reported bullying others less after the program.

Similarly, another study of 159 sixth- and ninth-grade students assigned some of them to a semester-long, yoga-based social-emotional wellness program several days per week for a half hour. The results revealed that students in the yoga group had fewer unexcused absences and detentions, and became more engaged in school, compared to students who went to school as usual.

These positive effects might be due to yoga-based improvements in students’ awareness of their emotions and behaviors. That might help students “control impulsive behaviors and negative reactions in order to meet situational demands and achieve personal goals,” the researchers explain.

National surveys estimate that nearly one-third of youth in the United States are overweight or obese and that a lack of daily physical activity is a key factor at play. As a form of mindful movement, yoga is particularly well-suited to provide non-competitive, gentle ways for youth to engage in physical activity.

This 12-week study of 16 first-grade students who participated in 45 minutes of yoga twice per week found that yoga can improve motor abilities, including balance, strength, and flexibility. In addition, based on surveys from hundreds of parents, students, and PE teachers, another study found that a year-long program of yoga-based activities for 5-15 minutes per day improved students’ physical well-being, including their body posture, sleep quality, fatigue, and diet.

“Yoga appears to be simply a stretching activity, but the variety and sequencing of postures coupled with the practice of deep breathing creates an extremely diverse and effective method of enhancing a range of health-related fitness skills,” the authors write.

Advocates for school-based mindfulness programs suggest that the benefits of these programs might reach beyond students to impact classroom climate and teacher effectiveness. Preliminary research on yoga programs for educators suggests that yoga might be good for teachers’ well-being, too.

For example, one study randomly assigned 64 educators to either participate in a 20-minute yoga trapeze and mindfulness program four days per week, or go about their work as usual. The results revealed that the 16-week program helped educators improve their mindfulness, positive mood, classroom management, and physical symptoms, compared to regular work. These educators also showed improvements in blood pressure and cortisol.

The promise of school yoga

Research on school-based mindful yoga is still in its infancy. Several research reviews support implementing these programs, but it’s important to keep in mind that some studies have found limited or no effects from them. And many studies use “self-report” questionnaires where students rate themselves, rather than collecting objective data or reports from parents and teachers. Larger, more rigorous research needs to be done to clarify the benefits of these programs and what causes them, including the optimal amount of practice time and best practices for implementation aerial yoga hammock.

In just the past two years, more than 350 new studies have come out exploring the benefits of yoga and mindfulness for youth—a clear sign that interest in this subject is growing rapidly. We’re confident that the evidence for yoga in schools will continue to expand, and that it will help students cultivate social, emotional, and physical health; academic success; and a positive school climate.